Awesome Area That Has Just About Anything a Tourist Could Want!

The Camden Market is located in Camden Town in the historic former Pickfords Stables, just a couple miles from Central London. The market can be found at the end of Camden High Street just over the Regent’s Canal bridge.

Most stalls are open daily from 10 AM to 6 PM (except for Christmas). However, times vary for each business and you should have no issues finding plenty of stalls open until late in the evening.

Weekends and bank holidays are when the market is at its liveliest.

Camden Market has got everything from souvenirs to replica products and even legit stores. I recommend checking out the souvenirs, wallets/bags, shoes, watches.

There are for sure bargains to be had and after you’re done, go to one of the many pubs and enjoy some excellent British food and drink!

In this video we’re actually exploring a couple markets in England. First off, the famous Camden Market in the heart of London! Then we’re off to Manchester to hunt for brands like Gucci, Yeezy, Hublot, ASSC, Off-White, Moncler, The North Face and much more! So come along and enjoy the ride!

Everything to Know About the Camden Market in London

How to Get to Camden Market in London?

The Camden Market is located in Camden Town, not far from Central London. It’s quite easy to find on a map or on transportation routes. The address is 54-56 Camden Lock Pl, Camden Town, London NW1 8AF, United Kingdom.

Here are some of the different ways you can get to the Camden Market:

Via The Tube (subway / Underground)

This is my recommendation. The Tube is the cheapest BY FAR  to get anywhere in London.

It’s easiest to buy say a day pass or a weekly pass rather than buying each ticket every time you want to hop on.

The Tube is the most direct way to arrive at the Camden Market. The two underground stations servicing the area are Camden Town and Chalk Farm Road, both are found on the Northern Line. You can also get off at Mornington Crescent and walk for about 10 minutes. 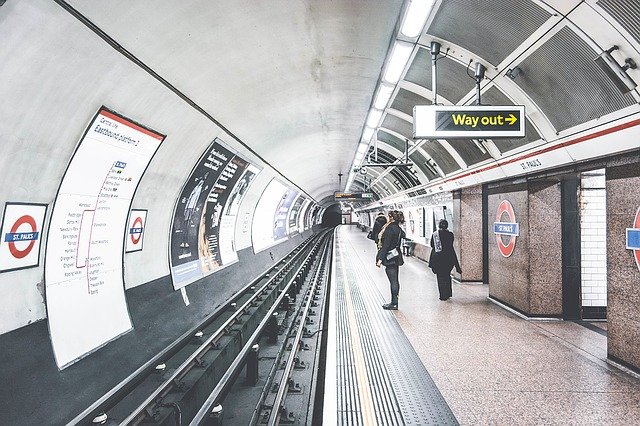 You can also take the overground train on the North London line to Camden market. The advantage is that you will also get some great views over what is old London.

You may also take the bus. The Camden Market is reachable via routes 24, 29, and 134 from London’s West end.

Shopping at the Camden Market

The Camden Market has just about anything you could want. You’ll find legit stores, but also some replica products and there are some bargains to be had for sure. I recommend checking out some of the souvenirs, bags/wallets, shoes, and watches.

Tip: if you like cereal, there’s a place that is themed like a 90’s kids bedroom and you can choose from a huge variety of cereals. Super cool nostalgic experience! 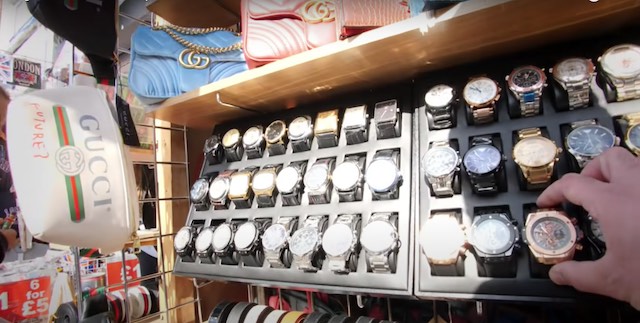 The Camden Market is open daily, but it’s busiest during weekends and bank holidays. However, during these times it could be absolutely packed with people, making it difficult to walk or find tables at the restaurants. In the summer, things are even busier!

The Stables Market offers eclectic boutiques that sell anything you can think of – from books, hand bounded leather notebooks, and records to antique furnishings, vintage clothing, restored vintage luggage, Moroccan lanterns, Celtic jewelry, and more. Among locals, the area is also popular for its fruit and vegetable markets.

Where to Stay in London, England?

London is such a popular destination for travelers that you can find just about any type of accommodation you prefer. Depending on your budget, you can spend a little or a lot in London. There are many hotels available all over the city at a wide range of prices.

If you are on a budget, then you might want to look into some of the hostels around the city. There are plenty to be found, although they can be slightly more expensive because London is an expensive city. If you don’t want to share a room but are still on a budget, there are also many inexpensive budget hotels all over town.

For those of you wanting more of a local experience or to stay for a longer period of time in London, you might consider renting an Airbnb. There are a number of Airbnb’s around London where you can have your own apartment or “flat” – which can really make you feel like a local rather than just a tourist.

Places to Visit in London & Around England

Camden Market in itself is an awesome area that has just about anything a tourist could ask for. Whether it be food, drink, shopping or just even people watching, you’ll be sure to get some entertainment for the day!

There’s so much to see in London, it’s basically impossible to take in everything the city has to offer on a single trip. 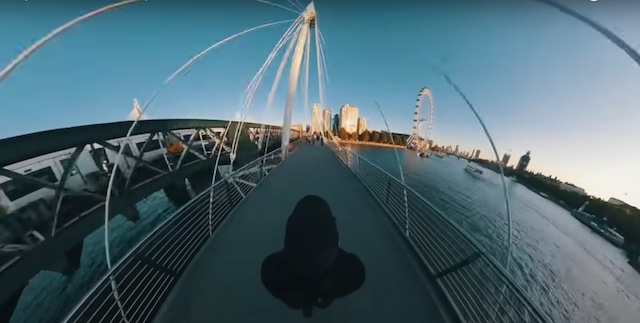 Here are some of the main attractions you should definitely add to your list of things visiting while in the capital city of England:

Places to Visit Outside of London

If you have time during your trip, it’s worth taking a trip outside of the busy city of London to explore other areas of the country. England has it all – countryside, coastline, castles, and Unesco World Heritage Sites. Here are some of the most popular places to see outside of London:

You absolutely have to get yourself a classic fish ‘n’ chips. They’re served at practically every pub in Camden. You can’t leave England without getting one! 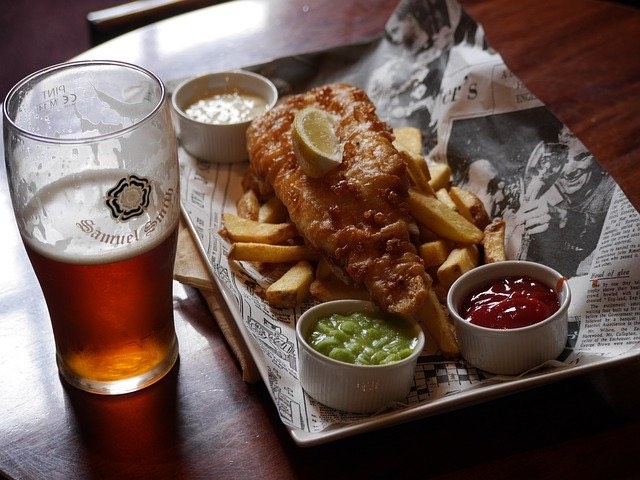 What Is English Food?

Traditional British cuisine is simple yet wholesome, but at the same time, it has always been influenced by other cultures. In ancient times, it was influenced by the Romans and in the medieval era, by the French. During Victorian times, the Brits added exotic spices from all over the Empire to their dishes.

In the late 1980s, the cuisine took a new direction by returning to its traditional roots. Game reclaimed its popularity, although it has always been a central part of English cuisine. In London, you can experiment with the best dishes on the whole island.

The Best Food in London Visitors Should Try

London acts as a representative of everything British. Some of the must-try dishes here include the famous English breakfast, fish and chips, meat pies, Yorkshire puddings, roast duck, and chicken tikka masala. Oh, and of course the traditional afternoon tea.

Foods to Try at Camden Market

Camden Market is renowned for its fantastic street food market. It’s home to a staggering array of international cuisines, from Malaysian rendang and jerk chicken to Venezuelan arepas. Try the delicious beef bourguignon served in a brioche bun to get a comforting taste of France or maybe some egg buns that are perfect for breakfast. Finish off your meal with some naked dough, which is cookie dough that’s totally safe to eat raw.

About the Camden Market

Long before Camden Market became one of the most recognizable markets worldwide, and even before it was a market, the whole area was a large industrial site that also included many distilleries. Camden town was actually known as being home to some of the finest gin in the world. 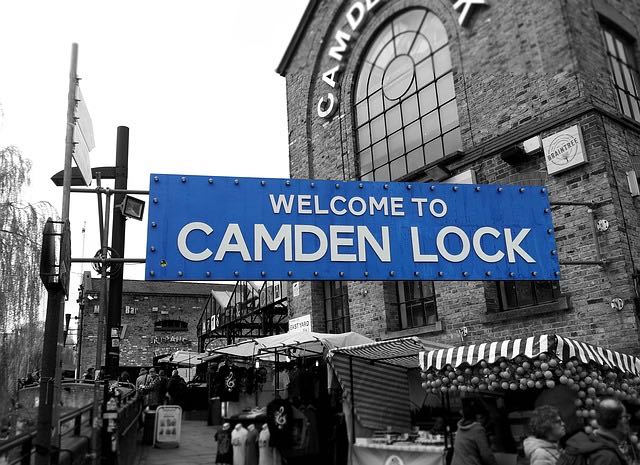 It wasn’t until the early 1970s that Camden welcomed its first traders. Camden market opened in 1974 as a small arts and crafts fair set up in a run-down timber yard, open only on Sundays.

Its popularity, however, grew fast and it became a permanent market open seven days a week. Today, Camden Market is known for being cool, edgy, and buzzing with interesting people and alternative lifestyles.

London is the capital of England and the United Kingdom. Its history extends over 2,000 years and was reportedly founded by the legendary Brutus of Troy about 1000–1100 B.C.E. after he defeated the mythological giant Gogmagog. Leaving aside these legends, Londinium was established by the Romans in 43 AD. After the fall of the Roman Empire, London was taken over by the Saxons and began experiencing a new phase of prosperity.

During the 9th century, the city suffered numerous Viking attacks. During this time, the Danish settlers established themselves in this area, encouraged trade and opened businesses. Most of current London, however, is from the Victorian period (1837 – 1901). In 1963, a new division of the city was made, comprising the old town and more than 30 metropolitan neighborhoods. These divisions can still be seen today.

History of Trade & Producing Goods in London and England

Although it was the largest city in England, London did not become its capital until the 12th century. And one of the main factors in London becoming the capital of England was the rise of trade in the area. During the 14th century, the city’s port became an important European hub for the distribution of goods. This only strengthened during the 15th century thanks to the fruitful textile industry.

From the 16th to mid-17th century, the city benefited from the expansion of the maritime trade developed by the Tudors and carried on by the Stuarts. By the end of the 19th century, London established itself as a major international trade capital. It is also worth mentioning that London was also home to a large Jewish community that was renowned for its entrepreneurship in merchandising.