Check out one of the wildest markets I've ever visited with people spread out selling whatever they can!

Also known as the Chor Bazaar, the “Thieves Market” operates at the Subhash Park, which is in the Old Delhi part of the city. Here you can see some cool traditional buildings and meet some awesome locals. This seems like the Downtown of New Delhi. Whether it’s the actual Downtown or not, I’m not sure, but it sure seems like it!

The operating hours of the Chor Bazaar “Thieves Market” are not defined. But it typically opens very early in the morning around 5 or 6 AM and goes on until 5 or 6 PM. Those who get there earlier usually get a hold of the true gems for the best price.

You can really find anything at this market. It’s a huge area where people just put on display whatever they want to sell. But I’d recommend shopping for traditional Indian garb and decorations. Get some silk and you’re good to go! Watches are a must as well!

In this video, we’re exploring the famous Thieves Market in the district of Old Delhi. Also known as the Chor Bazaar, come join us on this insanity as we bargain for all sorts of goods!

Everything to Know About the Thieves Market

How to Get to The Thieves Market

Thieves Market is located in the “Old Delhi” area of New Delhi. This is the oldest part of the city and where many of the most meaningful historical buildings are. For example, the complex formed by the Red Fort, Khas Mahal, and the Diwan-i-Aam is just a stone throw away.

Although there were serious plans for moving it, the Thieves Market still operates at the Subhash Park. With almost 1,200 shops, it is impossible to miss it.

Transportation to the Thieves Market 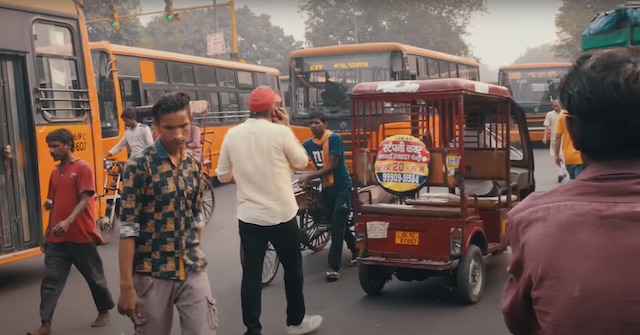 I took a tuk-tuk (2 actually) to get to the Thieves Market. Some types of Tuk-tuks only go in certain areas so you might have to get multiple rides depending on where you are coming from. Don’t worry, they’ll let you know if they can go that far or not.

Even if Tuk-tuk drivers tell you they can take you all the way to the Chor Bazaar inner areas, it is literally impossible for them to drive in there.

So likely they’ll just take you to within walking distance, just like a taxi or a motor taxi. ** Make sure you settle the price before you get in!

There are two stops that let you out at a walking distance from the Chor Market in Delhi. You can take the Violet Line and get down at Jama Masjid, or the Yellow Line and get down at Chandni Chowk. With this last option, you´ll get down in the middle of Old Delhi, which is great to visit on foot.

Taxis and motor taxis can only take you so far because the intricate roads leading to the Chor Market will be so populated that going forward is going to be difficult. You can take a Taxi and get out at a walking distance.

As in many countries, there are ride-share apps. A popular one in India is Grab Bikes – which is basically like getting an Uber, but on a motorbike and they will drive you to your destination. Just like with taxis and motor taxis, maneuverability close to the Chor Bazaar is literally impossible; even for Grab bikes. Tell them to take you to Jama Masjid for example and you can walk the rest of the way.

Shopping at The Thieves Market

Thieves Markets in India, also known as Chor Bazaar, is probably the wildest type of market you can go to! This market is spread out over a huge plot of land where people spread out their blankets on the ground like a picnic and display whatever they are selling! And I mean WHATEVER they can sell. Everything from used phones, shoes, shirts you name it. I even bought a 3-pack of (new) spray deodorant. This market is good for traditional Indian knick-knacks as well as colognes, perfumes and India garb!

It seems like you can get just about anything you want at the Thieves Market. 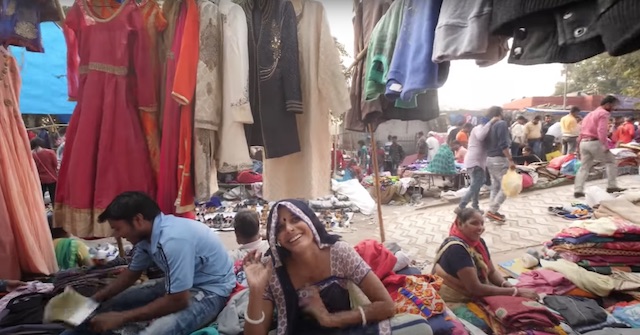 Since so many clothing manufacturers make their products around Asia, some items discarded for not being perfect end up at the Chor Bazaar for a fraction of its retail price. So you can find a lot of popular clothing and accessory brands here, including Louis Vuitton, Zara, etc.

Many tourists and locals look in the Chor Bazaar first when they are looking for a new camera, camera supplies, laptops, phones, tablets, and all of their accessories. A pro tip is to check everything more than once before you let the price tag makes you reach for the pocket immediately. There are many, many very close duplicates that will confuse even an expert.

India has a long tradition of handcrafted items. You can find some amazing pieces of traditional clothing in bright colors, embroidery, inlay, and much more. It is the perfect spot in Delhi to buy souvenirs at a fraction of what you would spend in any shop outside the Chor Bazaar.

Visiting the Chor Bazaar on a Sunday allows you to buy used books by weight at the famous and adjacent Daryaganj Book Market. Offers start as low as 50 rupees and you can choose from a very wide variety of books of all kinds. Also, you can buy stationery, leather items, antiques, food, shoes, and much more.

Where to Stay in New Delhi

There are many options for accommodation near the Thieves Market because it is in a popular touristy area of the city, Old Delhi.

Where the Chor Bazzar or “Thieves Market” is located is right in the heart of historic Old Delhi. This is a popular area that’s a must visit for anyone traveling to New Delhi because if the history, traditional buildings and overall vibe of the district. There are many tourists sites in this area as well.

Once the center of backpacking activity, this neighborhood holds famous monuments like, for example, the Qadam Sharif dargah built in the 14th century to honor the footprint of Prophet Mohammed. With time, the backpacker crowd moved to the more modern southern part of Delhi for more comfort and safety. Paharganj became a great place to visit during the day.

This neighborhood is very close to the Thieves Market and yet far enough to be very different. It is very easily recognizable in any map because it has a circle in the center with eight streets coming out in different directions. The epicenter of the fun is called Central Park and hosts various events such as Awam Ki Awaz, the Youth Festival. Also, Central Park is where the first three-color flag was raised.

For the non-vegetarian audience, Delhi´s very own butter chicken is a must to try before leaving town.

Another great dish to try in Delhi is chola bhatura, a tasteful combination of spicy chickpeas and inflated maida flour bread. It is not only tasty but also fun to eat.

Finally, that sweet touch can be jalebis, a spiral of flour fried and then submerged into a syrup which makes it utterly sweet and orange/golden looking. 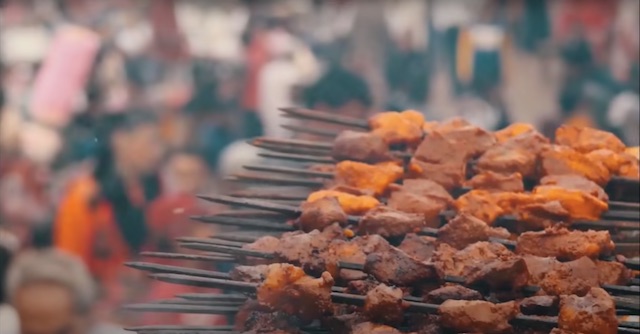 If sitting down in a restaurant for a meal is not your thing, there are plenty of dishes you can eat while walking. A classic from Delhi is chaat; for many the go-to option in terms of street food. If you love a bit of spicy and a spongey body, chaat will blow your mind.

If you are not ready to go full-on with the flavorful dishes India offers, then your best way to enter Indian food is through momos. These are steamed dough pieces with different fillings that are easy on the palate and good for the stomach.

Finally, a good taste of classical street Indian food is paranthas. Parantha is basically deep-fried stuffed bread offered with a wide variety of fillings that you can devour as you walk.

For something to drink, try some of the poplar sweet-tasting lassie or traditional chai tea.

About The Thieves Market

Starting out in 1942, the Chor Bazaar was only a handful of sellers with discarded, worn-out clothes for sale. This was in Ajmeri Gate, but since then, the market has moved at least ten times. The next destinations following were Shaaz ka Talab, Chawri Bazaar, Red Fort, Jama Masjid, Subhash Park, and Delhi Secretariat.

Location wasn´t the only thing that changed; in that time it also grew exponentially with a current headcount of over 1,200 sellers. The reason why sellers and buyers grew with the years is that among all of the flea markets in Delhi, this is one of the oldest and most diverse ones. Also, the prices are among the lowest in the country; there are even discarded pieces from big brands waiting for customers with the tags still on.

Every Sunday, a horde of travelers and locals line up to shop, bargain and have a good time.

Trading in India can be traced back all the way to over 5,000 years ago but had its golden era between the 12th and 18th Centuries. During those close to six hundred years, prosperity was everywhere. In fact, it is reported by historians that India would get 3,000 ships for trading a year in some ports. This speaks of a great volume of trading done with other countries during the Sultanate centuries (12th to 14th centuries) as well as the Mughal ruling (16th to 18th centuries). The well-managed currency system and the proliferation of multiple, large trading cities connected by usable roads, lead to exponential growth and prosperity in the entire country.

India´s reputation in trading, though, was not only due to the good connection between trading points, but the quality of the craftsmanship. Delicate pieces coexisted with fine spices and precious stones on every market in the country. As much as Indians were buying luxurious items overseas, they were also exporting finely-crafted pieces. India´s prosperity, though, came to an abrupt end when the British East India Company raised taxes to asphyxiating levels. Also, importing items from England exclusively sent the entire system to bankruptcy shortly after. With only the internal market available, the flourishing of trading that made India prosperous was something from a bright past. Beautiful craftsmanship, though, can still be found today. The heritage of India´s rich history shines through in every piece.

India (the territory now known as) was one of the major economic powers for most of the last three millenniums. Experts and historians traced back the beginning of this tale of prosperity and growth all the way back to 3300 BCE. From that moment and until 1750, India grew prosperously and relentlessly population-wise and production-wise.

By the time it became a British colony, India alone represented 25% of the global GDP. By the year 1900, after exponential Western growth and severely restrictive policies leading to deindustrialization and recession, India represented only 2% of that GDP.

After the British left England, by 1947, the protective measures and the extensive public ownership lead to a new breath of hope for the country. Nowadays it is considered to be one of the fastest-growing economies in the world.

Any cookies that may not be particularly necessary for the website to function and is used specifically to collect user personal data via analytics, ads, other embedded contents are termed as non-necessary cookies. It is mandatory to procure user consent prior to running these cookies on your website.