Located in the heart of the city, Divisoria Market one of the oldest markets in Manila. The market is located in the middle of Chinatown in Manila, between Tondo and Binondo. It is surrounded by Santo Cristo, Juan Luna, Recto, and Comercio streets.

This is a hybrid market with indoor and outdoor areas. The indoor area is open much of the day, while the night market area opens after dark and stays open until around 9:00 pm.

Basketball shoes! People in the Philippines are HUGE on basketball so they have a massive variety to choose from. One of the biggest varieties I’ve ever seen

But in general, you can find all sorts of shoes here at the Divisoria market.

In this video, we are in the heart of Manila, Philippines at the Divisoria Market. This is probably the most requested market from all of you for me to visit.  We’re bargaining for many products such as Jordan, Off-White, NBA jerseys, Supreme and many more! So come along for the ride!

Everything to Know About the Divisoria Market in Manila

How to Get to the Divisoria Market in Manila?

Personally, if you’re in the Philippines, you need to travel Filipino style, so either hop into a Jeepney or a motorized tricycle.

But visitors to Manila can also get to the Divisoria market by other ways too. If you want to come by train, you can take the LRT 1 or PNR MC line. The area is also served by buses – get off at Recto Avenue station or Plaza Lawton station (which is a bit further).

Alternatively, you can always take a taxi.

Divisoria is located in the middle of Chinatown in Manila, between Tondo and Binondo. It is surrounded by Santo Cristo, Juan Luna, Recto, and Comercio streets. It’s a popular area for visitors but especially locals as well.

Shopping at the Divisoria Market

Divisoria Market is a maze of small shops and malls. It is famous for selling just about anything you can think of. Here, you’ll find textiles, clothes, bags, accessories, religious items, toys, electronics, pirated DVDs, office supplies, home décor, and much more. Tourists flock here for the fake, unauthorized replicas of luxury brands. However, you’ll find that some are really good copies of the original products. 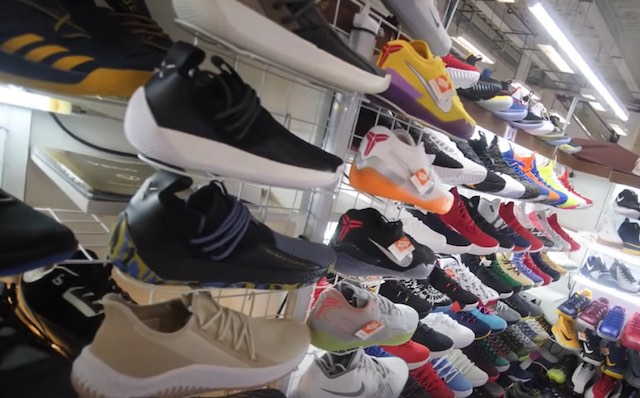 For me, I was blown away by the number of basketball shoes available. I mean, they had all kinds of shoes — but the basketball shoe selection was pretty crazy!

The locals visit the market frequently for the fruits and vegetables that come directly from farmers and producers. There’s also plenty of stalls selling Filipino treats and snacks.

Where to Stay in Manila, Philippines?

Manila is a huge city. Definitely take some time to figure out where you want to go and what you want to do before finding a hotel that is central to all of that. You can easily find a wide range of hotel options here, from luxury to budget hostels. There are also some pretty cool Airbnb’s to choose from as well.

And when you are finished enjoying all the craziness of Manila, if you have time, definitely head out to some of the islands and enjoy the beach life in the Philippines! There are some really beautiful and laid back resorts that are not very expensive either!

Places to Visit in Manila & Around the Philippines

Manila is often the jump-off point to the Philippines’ incredible beaches. However, the city is beautiful and deserves to be explored at a slow pace. 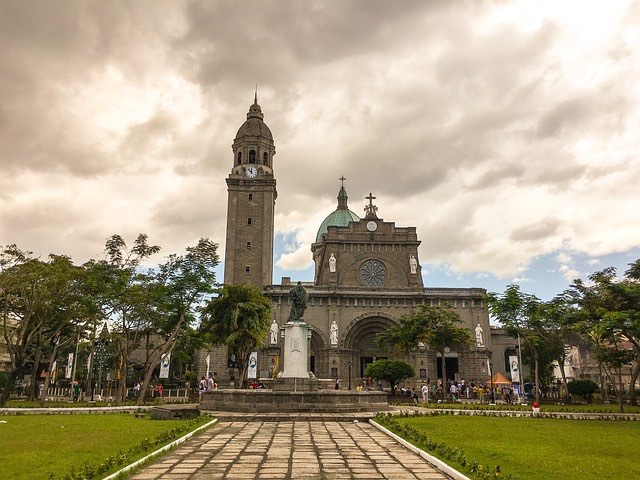 Some of the most interesting tourist spots include:

Just like any other Southeastern Asian cuisine, Filipino cuisine is influenced by many different cultures and it has a strong Spanish influence. Some staple ingredients of Mexican cuisine – chili, tomato, corn – are also present in Filipino cuisine. It is considered the least spicy of all South East Asian cuisines but by no means it is bland. The Filipinos use garlic, onions, and ginger to spice up their delicious dishes.

Manila is a great destination to taste the traditional cuisine of the Philippines. You’ll find a range of dishes consisting of poultry meat such as the hearty soup known as tinola, Pancit bihon (noodles with meat or seafood), Ensaladang talong (eggplant salad), and Kinilaw (seafood salad). You’ll also want to try Daing na bangus, a special dish prepared from milkfish, a fish that is caught only in a few places on the planet. Most desserts in Manila are made with fresh fruit but there are some interesting types of pastries you can try here.

There’s a distinct range of street foods available in manila. Some are skewered on sticks just like a kebab. One example is the “banana-cue”, a banana or plantain placed on a bamboo stick, then rolled in brown sugar and pan-fried. Sweet potatoes, fish, squid, and other meats are also skewered on bamboo sticks and pan-fried. These street foods are commonly sold in markets by street vendors. Burgers stands have also become very popular across the country.

About the Divisoria Market

Located in the heart of the city, Divisoria Market one of the oldest markets in Manila. This market is not for those who hate busy streets – it gets very crowded here. But if you’re up for an adventure, you’ve come to the right place. Just make sure to put on a pair of comfy shoes.

Along with the small shops, this colossal and chaotic market has several malls like Tutuban Center, Meisic mall, and Divisoria mall. Visitors can also enjoy a food hub where they’ll find a variety of cuisines, including Chinese and Filipino foods.

The history of Divisoria can be traced back to the Spanish Colonial Era. At the time, non-Christian Chinese traders were not permitted to live and do business inside the Intramuros. As a result, the ethnic Chinese set up shop near the Pasig River, turning the area into a commercial hub. What was initially just a small community of Chinese merchants expanded and blossomed into a major commercial center in the 1990s.

The convenient location, transportation facilities, and the natural canal that connects the market to Pasig River are some of the factors that helped Divisoria to thrive and become what is now dubbed the “mother of all markets” in Manila.

The City of Manila is the capital of the Philippines and the second-most populous city in the nation. The earliest evidence of human life in this area dates to around 3000 BC. By the 13th century, the city consisted of a fortified settlement and trading quarter near the mouth of the Pasig River. In 1571, conquistador Miguel López de Legazpi declared it a territory of New Spain (Mexico). From the late 19th century onwards, Manila was somewhat of a Paris of Asia, having enjoyed the benefits of urban development. 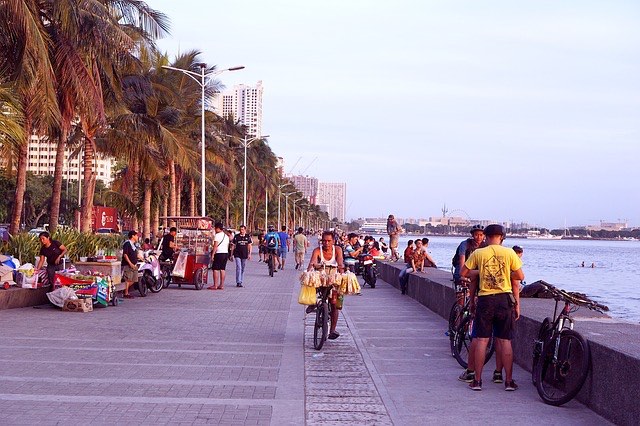 Its colorful history encompasses not only the Spanish colonial rule but also American rule and Japanese occupation as well as post-WW II democracy, Martial Law, and the post-Martial Law years. Many claim that Manila never fully recovered after WWII. Today, it is a conglomeration of 17 regions. Locals complain about its disunified feel and the lack of a sense of whole. However, Manila’s scattered character is part of its identity and should be taken as such.

History of Trade & Producing Goods in the Philippines

The first foreign traders to do business with the inhabitants of the islands they called Mal were the Chinese. The first recorded Chinese expedition to the Philippines was in AD 982. Within decades, the Chinese traders became regular visitors to towns along the coasts of Mindoro, Luzon, and Sulu. By AD 1100, the traders from India, Sumatra, Thailand, and Japan, had also included the Philippines islands on their trade trail. The trade thrived for several centuries. 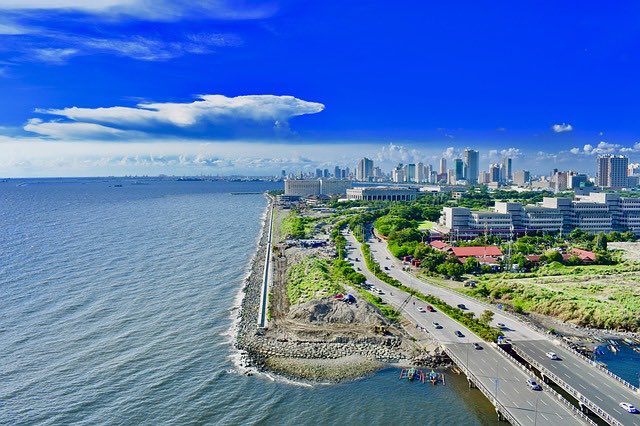 The location of the Philippines made it possible for the Spanish conquistadores to engage in international trade with China and Japan. The trade with the Chinese Empire was channeled through Manila and from there to New Spain (Mexico). Most of the exports consisted of crops of sugar, opium poppies, indigo, hemp, and tobacco.

At its independence in the 1940s, the Philippines was still an agricultural nation. Today, however, the island nation is a leading exporter of electronic products including processors and hard drives as well as agricultural products such as abaca, coconut, and pineapple. Its major export partners are China, Japan, and the United States. As for imports, they consist mostly of electronic products, transport equipment, fuel, and industrial machinery.