There’s free shuttle from Tiendesitas to Greenhills from 2 pm to 8 pm every day. Or you can take public transportation from popular areas such as Fairview, Marikina, Pasig, and Ortigas center. Or just take a jeepney (my favorite) from the Ortigas/Robinson’s Galleria Terminal.

Shoes! Basketball is MASSIVE in the Philippines so as you can imagine, so is shoe culture. Greenhills has some of the best quality and largest selection of shoes I have ever seen in a single location (even compared to China). With that, they have a nice NBA jersey collection as well. Watches, wallets and belts are also a go-to here. But seriously, the shoes are crazy!

I had so much fun bargaining in the Philippines. Everyone was telling me I had to go to Greenhills, so that’s where we are today in this video. We are in Manila, Philippines bargaining for all the latest brands such as Coach, Gucci, Prada, Yeezy and much more! So come along!

Everything to Know About greenhills shopping center

How to Get to Greenhills Shopping Center 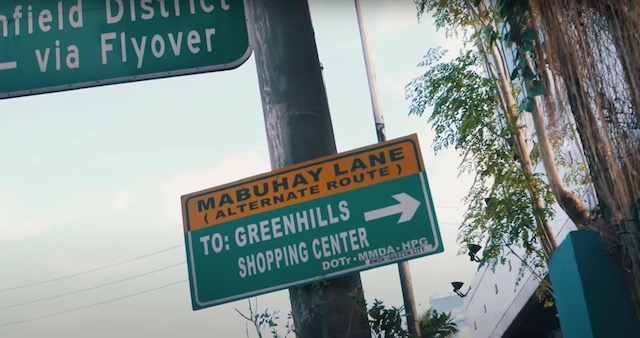 There’s free shuttle service from Tiendesitas to Greenhills from 2 pm to 8 pm every day. You can also use public transportation. Public transport terminals go between Greenhills and popular areas such as Fairview, Marikina, Pasig, and Ortigas center.

You can also take one of my favorite types of transport in the Philippines, the jeepney. Hop on one at the Ortigas/Robinson’s Galleria Terminal and get off at the Greenhills shopping center. 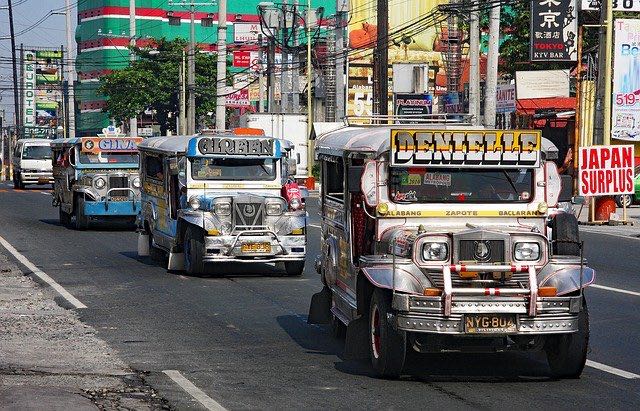 You HAVE to use the Jeepney’s. Have to.  Jeepneys are the primary transportation system used all over the Philippines.

This is a vehicle that is proudly Filipino-made that stood the test of time. Basically, it’s this old, long “Jeep” type vehicle that the US left there during the war times (or something like that) and so now they’re decorated very brightly and used as public transportation. Each jeepney is uniquely designed, and some even have a blasting sound system giving their vehicle its distinct character.

You haven’t “tried” Manila until you rode in a Jeepney.

They are, however, very confusing to know which one goes where etc. so best to first ride with a local to get the hang of it.  Otherwise, if you’re feeling daring, just hop on!  If you want to interact with the locals, squeeze yourself in the jeepney, seek help from your seatmate, find the best drop-off point.  Just don’t forget to pay the driver as soon as you get on!

The easiest way to find your destination is by hailing a taxi or using Grab. Hailing a cab, especially during peak hours or if you are on random streets, can be challenging. So it’s easier to use Grab instead.  Grab is a service similar to Uber, where you use the app on your phone to get a car. The fare is comparable to a taxi with base fare ranging from Php 40 (80 cents) to Php 70 (USD 1.41), plus per kilometer rate.

For places far from the main street, motorcycles or bikes connected to a sidecar is the quickest way to go. Travel like the locals and squeeze in those narrow streets, feeling the wind against your face.

The MRT1 goes from North Avenue in Quezon City to Taft Avenue in Pasay City, navigating the busy street of EDSA. On the other hand, LRT1 & LRT2 stations are located along Taft Avenue to Rizal Avenue and Ramon Magsaysay Blvd to Aurora Blvd. A word of caution: Avoid riding the transit during rush hours from 5 pm onwards. It can be super crowded!

Greenhills is a shopping mecca for people from all walks of life. It’s one of those places that the locals visit, tourists, as well as international celebrities!

Pearls are the thing here. So it’s no surprise that people visit Greenhills to shop for jewelry as 90% of the South Sea Pearl is sourced from Lanao del Sur and Marawi. Aside from pearls, stalls also offer various gems and other stones.

Fake brands are everywhere in the Greenhills shopping center.  You can also opt for locally made or handcrafted items in different stores as well as many popular everyday brands. 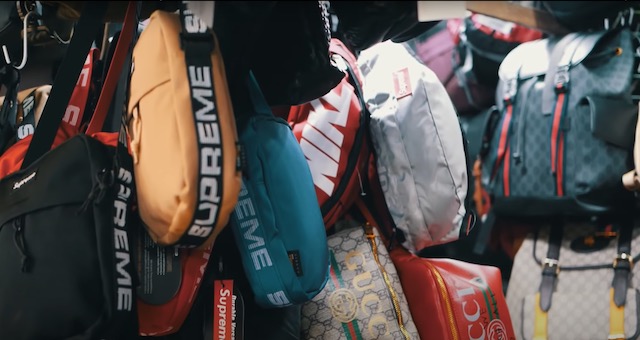 You can also find a number of electronics here. People also flock the mall to get their phones repaired and personalized. From smartphones, CDs, DVDs, computers, and accessories, they have it all. And these repairs are at a fraction of the price of other places.

There’s also other types of leisure and entertainment here at Greenhills, so it’s a one-stop-shop where you could spend the better part of a day.

Where to Stay in Manila Near Greenhills Center

Greenhills is near the Ortigas neighborhood, which houses several other shopping malls, offices, condominiums, and world-class hotels. Within two-kilometer radius, you have several hotel options such as:

For hostels, you can check Lub d Philippines Makati located along Makati Avenue, where you can choose to share a room or get one for yourself. The closest hostel to Greenhills with good reviews is Crossroad Hostel Manila, a 4-minute drive to Greenhills.

Manila is a melting pot of various nationalities, as well as locals in the Philippines. Throughout the years, numerous communities emerged around the metro. The top 3 on the list that’ll suit the taste of both locals and foreigners are:

It’s honestly hard to differentiate different areas in Manila just due to the density and “wildness” of it all, but personally I think Makati is a good place to get to know Manila.

Filipino cuisine may not be as famous as other Asian delicacies, but they don’t fall behind in aroma and taste.

What is There to Eat in Manila?

The best street food in Manila are the ones in skewers sold along the streets or in night markets.

Something that I love is called “Kwek kwek.”

It’s a small quail egg dipped in an orange flour and put on a stick like a skewer, super good! 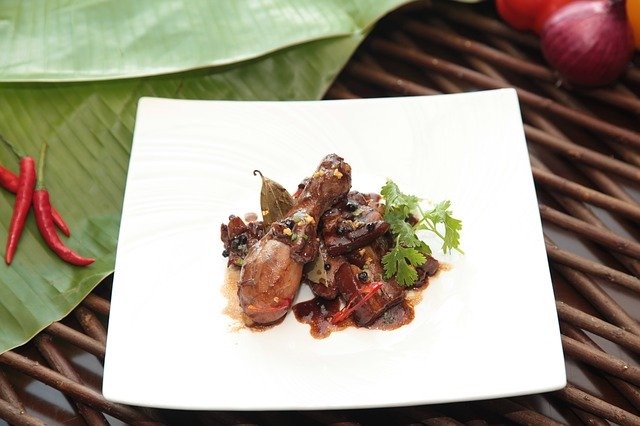 Also, you NEED to try adobo. It can be made a countless number of ways so not all adobo dishes are created equal!

As with many countries around the world, nothing goes to waste for Filipinos. Some things may not be as visually appealing, but sometimes they may taste better than you think! 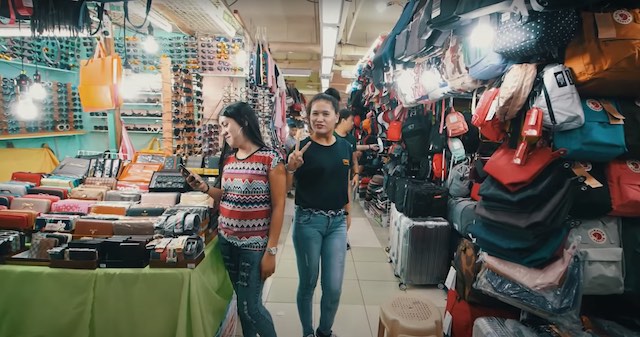 Greenhills shopping center is known as the first shopping market Manilla. The center sits on a 16-hectare property which is mixed-use and includes residential, shopping and leisure development. Filipino architect Juan Nakpil first conceptualized the mall in 1966, and a lot of things have changed since then.

Like most shopping centers or malls in the Philippines, Greenhills doesn’t only sell general merchandise but also provides leisure and a place to stay. People flock the mall during the Christmas season for its life-sized mannequin called “Christmas on Display” or COD. 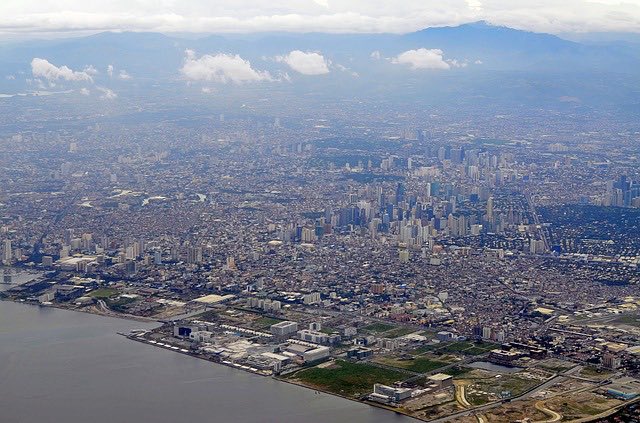 The earliest inhabitants of Manila are the Negritos, back in 3000 BC. Then came Malay-Polynesians, Indians, and the Chinese who settled in Binondo, the oldest Chinatown in the world. During this period, Manila was ruled by kings called panginuan in Maranao or panginoón in Filipino, acknowledged as the rulers of ancient Manila. Things changed in the 1500s when the country was discovered by the Spaniards. Since then, other nationalities set to conquer the nation.

Manila was referred to as a global city in 1949, aside from Mexico and Madrid, because of the uninterrupted routes for trade. In 1976, President Ferdinand Marcos reinstated the capital city to Manila under Presidential Decree No. 940. Many of the Philippine’s firsts are found in Manila from the university (established in 1590, light station (1642), hotel (1889), and rapid transit system (1984), among others.

Now, Manila is a highly urbanized city where you can see the President’s house (Malacañang Palace), several museums, and old infrastructures.