Psychological Barriers of Vlogging in Public: How to Get Over Your Fear 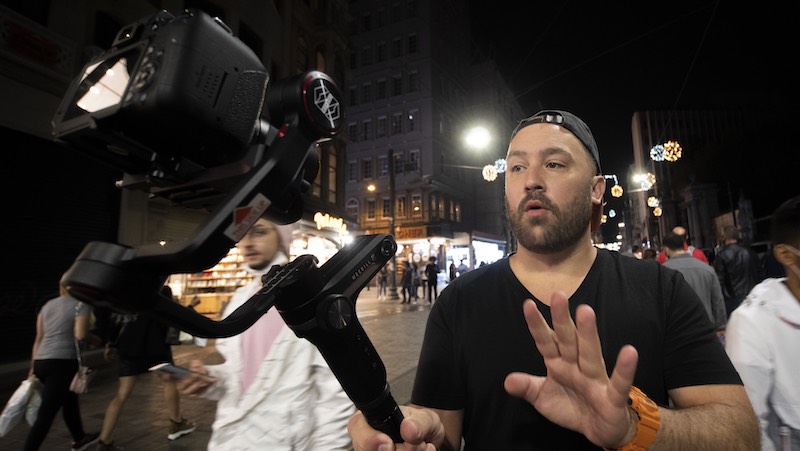 It’s All In Your Head.

We all only have so much mental capacity to handle a few thoughts and tasks at once. If you start to worry and think about the wrong things, it will greatly affect your on-camera presence and even worse, prevent you from starting altogether!

Filming in public is scary. But it is only scary if you allow it to be scary.

This I understand and quite honestly, to this day, it still takes me a few tries to settle into the “zone” of blocking out my surroundings and simply not caring… better yet, not even thinking about those around me.

Do I look silly? Probably. Does it matter? No, because we’re doing what we love and it’s a very noble thing to pursue your passion, no matter how uncomfortable it may feel.

But I admit, it does take a lot of practice to be fully comfortable walking around in public talking into a camera. For some people, it comes naturally. For others, comfort and confidence comes with the practice.

For me, I took a massive shortcut. When I first started vlogging in public was after I moved to China to pursue my dreams of starting a travel channel. What was great about being a foreigner in China was that nobody around me could understand me because nobody spoke English! How can I be embarrassed about making mistakes talking on camera in public when NO ONE around me understands me anyways?

This allowed me to get rid of, in my opinion, the biggest mental roadblock altogether – worrying about your surroundings.

-“These people probably think I’m SO into myself!”

-“There’s probably a bunch of people there, I’ll wait until it’s not as busy”

Notice how every excuse is hypothetical? You’re setting yourself up for failure over worrying about something that is not even real! And even if it was real, to put it simply…

And even if they did care, that shows more about themselves than it does you!

Think about it like this. You go to a pizza place to have a nice meal with your family. You don’t worry about eating pizza in a pizza place because that is what’s expected of you to do. Now what would you think if someone came up to you and yelled “Why are you eating PIZZA here?!” You’d think they had mental issues and you’d understand that the issue lies within themselves, internally, and not you because you’re acting as expected in a pizza place… eating pizza.

And in public, it’s kind of the same thing. Except we can do whatever we feel like in public. The only expectation of us is to not act immorally or break the law. So, if someone came up to you and yelled “Why are you FILMING here?!” Your first thought might be “Wait, am I on private property?” and once you realize you’re on public property, you’d ask them “Why can’t I film here?” Of course, they’d make up some lame excuse to try and justify themselves but you’d understand that once you realize you’re not doing anything wrong, the issue is within themselves and not you. 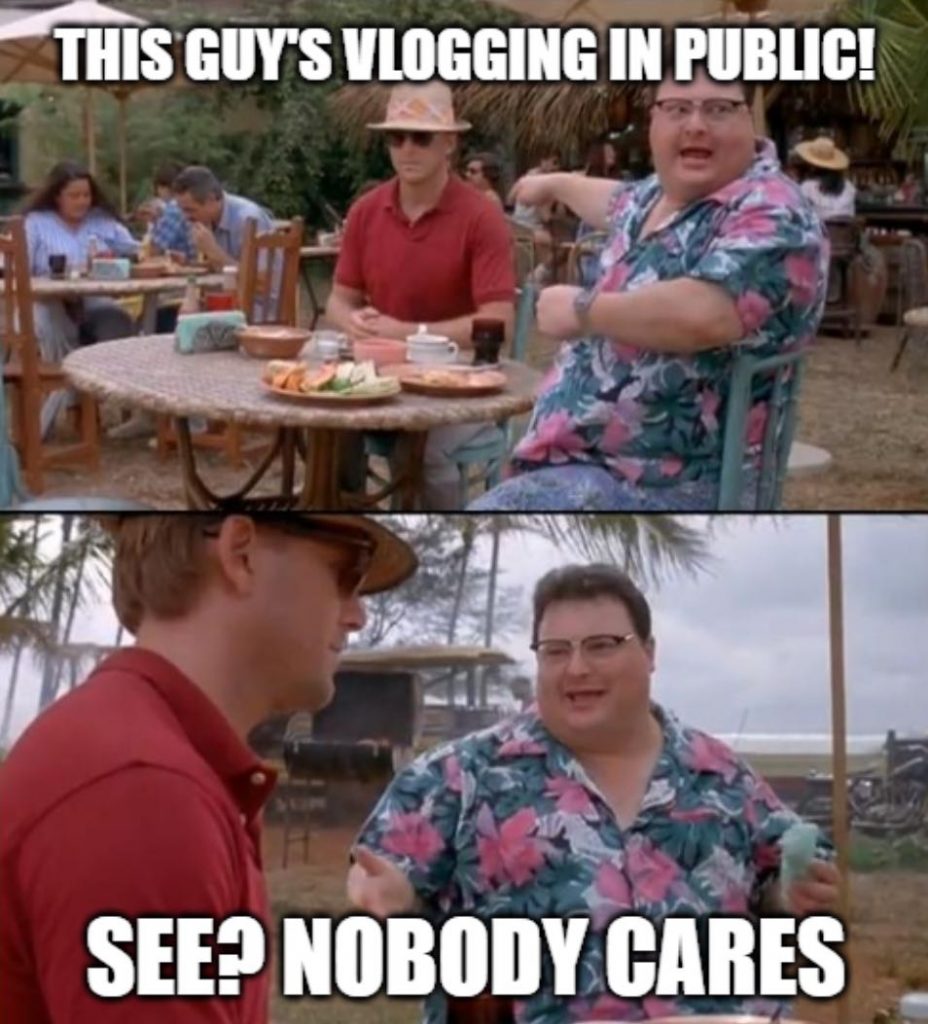 The quicker you realize that most sane people don’t care what others around them are doing in public, the quicker you’ll free yourself to gain the confidence you need to be the best possible version of yourself on camera.

Most people around you don’t care that you’re filming something.

You’re just a person with a camera, a tourist. They do start to care though when they can see that YOU are caring about what others are thinking of you which in-turn affects you even more, it’s a vicious cycle.

It’s like when you hear the saying “[Insert animal of choice] can smell fear.” If you’re awkward about it, you’re going to start to notice people around you can see that you’re awkward which then makes you even more awkward. And this could start to make others around you feel uncomfortable.

So all I’m saying is this. Just be shameless when you film. As long as you’re in a public place and not breaking any laws, you’re good to film as you please and no one can tell you otherwise!

But Let’s Get Back to China

Luckily, this was always a non-issue for me. It wasn’t until I went to Hong Kong (English is one of the official languages) where I suddenly realized that everyone around me could understand me. I felt…. Naked? It hit me that I had it easy for the past year and I realized how hard it would’ve been to get started back home.

This is why I am writing this. I understand the difficulties of vlogging in public. And if you’re here reading this, I hope what I am writing helps you in some way. Free up your mind so you can focus on what actually matters – connecting with your audience.

Anyways, it didn’t take me long to get in the zone of blocking out my surroundings and doing my best on camera in Hong Kong. This was all due to the fact that I had actually practiced and became more efficient. Does this mean you have to pack your bags and move 7,000 miles to take a “shortcut?” No. Absolutely not. I’m here to tell you that it literally JUST takes practice. Really, go outside today if you can and just start talking into the camera. It may feel really weird, but once you get back inside and reflect on it, you’ll begin to understand that JUST starting is everything (and you’ll feel great about what you just accomplished).

Why Not Practice at Home?

And if you can’t work up the nerve to even do that, that’s ok. Just start in your bedroom. Pull out your phone or your camera and practice just being on camera period! For me, I started working gigs on Fiverr, from my bedroom while living at my mom’s house. I was extremely underpaid (seriously like $5 for a couple-minute video) but that didn’t matter because I knew my only goal was to just get comfortable in front of the camera… because I knew this is what I wanted to do for a living and it would pay off in the long run.

And it did. I am SO damn grateful that I was able to understand this early on because looking back, it helped IMMENSELY! And it molded who I am and how far I’ve come today. So just know being on camera isn’t a “You either have it or you don’t” kind of thing, it literally just takes practice like everything else. So get that notion out of your mind if it’s there.

You can do this.

Now, As Far As Filming the Public Goes…

Now your camera is turned around, away from your face. You need those cinematic city shots to balance out and complete your video. However, now you’re actually filming the public! How do you “get away” doing this?

First, check your local laws about filming in public. Most places I’ve been to says it’s fair game. I know back home, in the USA, as long as you’re in public, it can be filmed.

With that being said, it’s just like being a street photographer, but you’re shooting video instead. I’ll keep this part quick as there’s not too much to say, however, I do have some tips.

This completely blocks out any distractions. As you’re filming, ANYTHING anyone says (even in a foreign language) you’ll think is directed at you. Even if you look to see if it was and it actually wasn’t, it’ll start to wear on your motivation to keep filming because now you’re second-guessing yourself. Bonus: if someone IS actually yelling at you, they will see that you’re wearing headphones and can’t hear them. Most likely, it’s not worth their time to escalate any further to question what you’re filming (ex: actually come up to you and get in your field of view to get your attention) Simply put, ignorance is bliss. Remember, you’re not doing anything wrong.

Remember, this allows you to get people in their most natural state and lets you show the world for how it is.

Nothing defuses a situation more than a genuine smile. And don’t just do a pursed-lip smile, but practice smiling with your eyes. And start to form this smile as your default. It’s really not that hard to be honest, just be aware. Think of your pet, a loved one, or something that genuinely makes you happy and it’ll start to come naturally.

Remember, as long as you’re not breaking any laws, you are fine. Worst comes to worst, if you get confronted (I’ve never been confronted using these tips) just delete the footage and be on your way. Not worth the hassle.

Film in Public With Confidence!

Anyways guys, I hope I was able to get to the core of it and give you some confidence and inspiration with filming in public. I know this is probably one of the biggest hurdles that prevents people from even starting to begin with! Seriously, once you break that barrier, you’ll be on your way to achieving your dreams! When I started, vlogging was still kind of a new thing so it was more “weird” to see someone filming themselves in public. But nowadays, it’s such a normalized thing with the massive emergence in social media these past few years. People understand it can actually be a job now, so also keep this in mind.

If you have any questions or feedback, I am happy to answer them and will reply to every comment in the section below! So make sure to do so! Have a good day everyone and remember, just getting started is the biggest step. It’s all downhill from there!

Make sure to join our awesome Creator Community for more content like this, and to get into our private Facebook Group where you can network, collaborate with, and learn from other creators!