How I Got Stuck in Egypt for 5 Months! 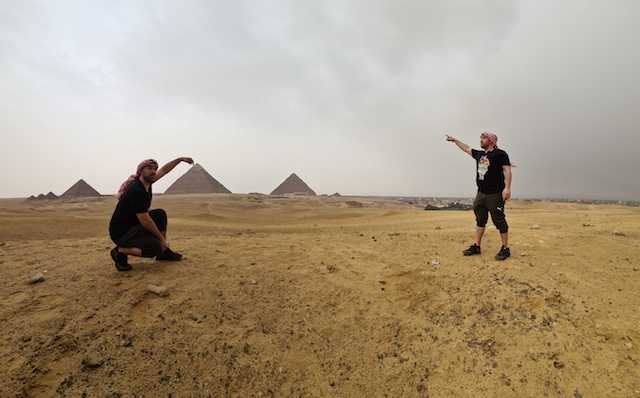 It all happened so quick.

I was on my way to Egypt! The ultimate tourist destination….

I landed, visited the Pyramids and the Sphinx. Next day, it was announced that airports would be closing within the next week. “If you want to go home, now’s your chance, afterwards, you’re stuck here” was pretty much the message.

I decided with my best judgment. I chose to stay. I figured being abroad when lockdown was lifted and this all “passed over” would give me a jumpstart to continue traveling and making videos (and technically it did). I’d rather be an expat abroad with the chance of ANY of the 190-ish countries opening its borders than being stuck home in America, as a citizen, not being able to leave. Besides, how long can lockdown really be? 1 month? I can live with that. – boy was I wrong!

My 2019 travel year ended in typical fashion. I rounded out December in Thailand, Singapore and then a semi-sorta-impromptu trip to Bangladesh to film a video to edit while I was back home in Wisconsin enjoying the holidays with my family. As I was home, I realized I had missed it more than I initially thought I did. Rather than staying home until late January and jetting out to the Philippines like I had originally planned, I ended up staying until late February and heading to London to meet up with a friend. You know, get back into the travel mood by going somewhere familiar before going to somewhere completely brand new to me, Egypt.

I arrived in Egypt in mid-March. “Cool” I thought, “Stay a month, get a couple videos filmed, then head to the Philippines to get an apartment and base out of.” – That obviously didn’t happen!

Of course, first thing on my agenda was to visit the Pyramids and the Sphinx! Arrived at my hostel, passed out and the next day I headed out.

I woke up, it was cloudy. The forecast was rain. It never rains in Egypt. The yearly rainfall is equivalent to one month’s rainfall back home. Whatever, I’m still going and risking it. I need to see the Pyramids. It rained.

Have you ever rode a camel in the rain in the desert?

I would have never thought that was something that would actually happen in my life. But here we are. It was worth it, great start to my trip! Now what should I visit next?

“You go home soon? Airports are closing” was a common thing I would be asked when speaking to locals. I was at a crossroads. Do I go back to where I JUST came from and risk catching anything traveling? Or do I just hunker down and stay put in essentially a third world country that may not have the best infrastructure to handle such potential chaos? Hindsight is obviously 20/20 as we have seen that only a VERY small fraction of the countries in the world were able to handle and contain it, not including “back home” USA.

I made the right choice. I stayed in Egypt. A few more days later, complete lockdown. Now it’s gone from 0 to 100.

How Long Is This Going to Last?

I didn’t know and quite frankly, I didn’t really care (at the time). The reason I say this is because although I hadn’t initially planned on staying long, given the sudden onset of the situation, I was ready to stay in Egypt for “about 2 months” I told myself. “No way was the whole world gonna be shut for any longer!” March to April, April to May, time went on and I was doing well, using my time wisely and being productive.

Obviously now as we all now know, the future is uncertain. I’m still here, as I write this – in August.  5 whole months later! My plan is to leave soon, but who knows…

What Did I Do in Egypt for So Long?

Of course, I went to the Pyramids, Sphinx, Egyptian Museum, Khan El Khalili Market and the city of Alexandria. You know, a lot of the popular must-see things. But unfortunately, nothing really was open for obvious reasons.

Aside from that, I had a lot of free time on my hands. So I just explored areas around town, made some videos, started this website, and overall tried to use the quarantine time to better myself.

I stayed mostly in Cairo but had to move around a few places during my time there. The Australian Hostel in Cairo was pretty awesome and had friendly staff (I stayed there for about 3 months of my time in Cairo). After Cairo, I traveled north to the historic city of Alexandria.  It was nice to change up the scenery and great to have the cool breeze off the Mediterranean Sea.

New Videos for Bargaining in Egypt

During my time in Egypt I was able to visit the famous and ancient Khan El Khalili market in Cairo. I enjoyed bargaining with the shopkeepers and chatting with the friendly locals. However, One thing that was quite old and tiresome but new for me to share with you guys was dealing with scams. Although these happen in every country, Egypt seemed to be more “slick” about it. Check the article explaining my experience here with the Free Gift Scam in Egypt.

In Alexandria, there isn’t really one particular market. But the whole downtown area is full of shops, which are fun to explore and do some bargaining.

How the Pandemic is Affecting Travel & Planning

This might sound weird, but I never used to really plan when it came to travel. When thinking of where to go next, I would have a country or three in mind and then pull the trigger on a flight about 3 days before take-off. I really thrive on ‘flying by the seat of my pants’ (no pun intended) when it comes to a lot of things in life, and travel is no different. When all the countries were open, the possibilities were endless.

I have to plan my next move, however, I can’t really plan because countries are updating their restrictions day-by-day. So, I should be used to that, right? Yes, I am. But really it causes some weird type of illogical stress. Maybe I just dislike being restricted and having limited choices, but it’s something that I (and many other travelers) are going to have to get used to for now.

Hopefully, it doesn’t last too long. Just gotta make sure to prepare for any sudden changes in schedule. I’m just grateful that I can still be able to do what I love, even if it means I don’t know where or what I’ll be doing next week. Just fly by the seat of your pants… in a sense.

My Advice for Traveling in 2020

Another thing that I have to consider now is VISAs. You know the little “Admit 1” entry ticket into a country? Those weren’t really much of an issue for myself as the Passport I hold is (was?) quite strong (USA). According to Passport Index, it ranks in at about 50ish (YIKES). Last time I checked, it was in the top 5 or so.

This is an issue now. I used to just go to most countries and get visa on arrival. Now, I am going to have to apply for a visa online before going and these can sometimes take up to a week to be processed! Let’s just hope restrictions to the country don’t change within that week, otherwise, some money might be lost due to application fees.

My advice for safety in these times… Just follow the rules.

Listen to procedures, apply them, and blend in. Don’t put a target on your back. No matter what your stance is on the “thing that’s going around”, one thing is for certain, people are hyper-aware now. The last thing you want is a confrontation with police, security, customs officers, what-have-you. You don’t want confrontation or even worse, trouble, especially in a foreign country.

Fewer things are more nerve-wracking than dealing with an authority figure that you don’t share a common language with. By being preventative you are being proactive. Be proactive.

Although I was able to visit the Pyramids and the Sphinx, due to the lockdown I wasn’t able to enjoy Egypt to the fullest extent. I’m not a history buff or anything like that, however, there’s something about Egypt that just draws you to WANT to learn about it.

There are many sites and experiences that I am leaving unseen. Luxor, the Nile cruise, Oasis and so on. I can’t even get into the great Alexandria Library! Many of the reasons (excluding the library, that’s something different altogether) are simply that at the current time, they are not operating. There are no tourists to bring in a profit.

It’s very unfortunate, however, I am still grateful for my experience here, mainly due to some of the most AMAZING people I have met. I will be back once the world is healed.

As I have shared earlier, it’s an uncertain time for travel and things can change at ANY given moment. With that being said, I just applied for and received (it was surprisingly instant) my Turkey VISA. I’ll be headed back to Istanbul! One of my favorite cities in the world! Why there you ask? Simply because it has the least restrictions on this side of the world. Borders are open and no quarantine.

To top it off, I’ll be meeting a friend from back home there to begin to travel together and make some BANGER videos for you guys, so stay tuned because he’ll probably show up every now and then!