11 Awesome Things to do in Turkey – Istanbul and Beyond! 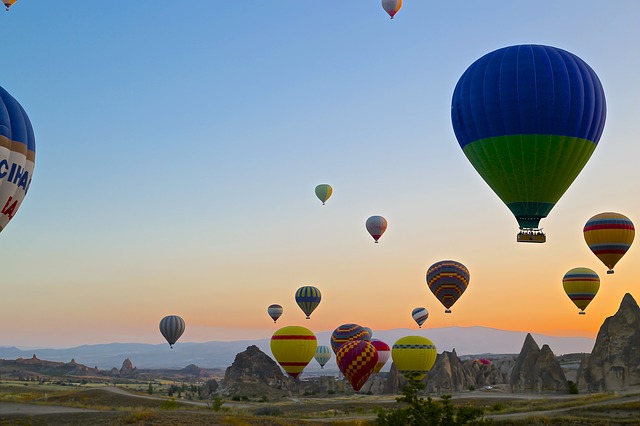 Having returned to Turkey for a second time, my wanderlust has been reignited with so many things to do and new places to experience. Turkey is a fascinating country where East meets West. It is filled with numerous archaeological wonders, historical sites, pine-covered mountains, sun-kissed beaches, and other natural attractions, as well as some really good food and welcoming people. There are so many attractions to see here that it would probably take you a month just to scratch the surface. If you don’t have too much time on your hands, check out some of the very best things to do in Turkey.

1. Explore Istanbul and Its Cool Neighborhoods

Istanbul is considered one of the most beautiful cities in the world and is often a must-see on any traveler’s bucket list. The city is spread across two continents, Europe and Asia, hugging the Bosphorus strait. I’ve actually visited Istanbul before; however, having returned to the city for a second time with a good friend I’m taking a lot more time to hang out and explore.

Visiting the city a second time and having more time to enjoy it has really opened my eyes to all the things to see and do here. Istanbul is a feast for the senses – the smell of spices, the salty breeze, the sound of people, the calls to prayer – and you can’t but love this mix of experiences. Each of Istanbul’s diverse neighborhoods offers something unique for the urban explorer. 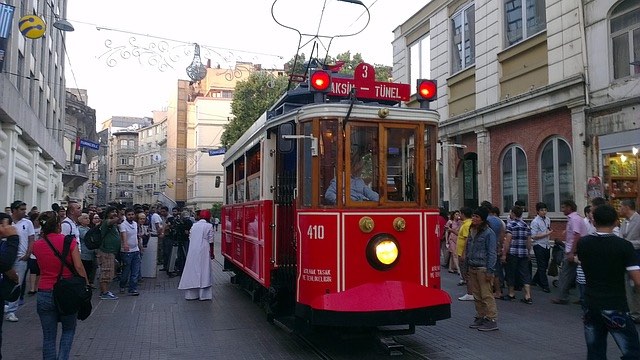 No visit can be complete without exploring the Old City, known as Sultanahmet, which was once the social and political center of the Byzantine, Ottoman, and Roman empires. This district gives you a glimpse into the heart of the city, and it’s here that you’ll find some of the most popular landmarks such as Hagia Sophia, the Topkapi Palace, and the Blue Mosque. Other must-see neighborhoods include Galata – with its impressive Galata Tower, Taksim – where you’ll find numerous places to eat, cafés, bars, and clubs, Besiktas – a very “young” district filled with students, and Karaköy – located right on the waterside.

2. Bargain in the Grand Bazaar Market

The Grand Bazaar of Istanbul is one of the largest and oldest covered markets in the world. It houses over 3,000 shops and welcomes between 250,000 and 400,000 visitors every day. Some go as far as to claim it is the most-visited monument on Earth, in terms of total visitors. Many of them are tourists, but not all of them actually buy something. Some travelers may come from a place where the price for pretty much everything is fixed, so they might feel uneasy when encountering an enthusiastic Turkish shopkeeper trying to seal a deal. But honing my bargaining skills in the markets is what I live for, so to me, this is an exciting place to haggle! 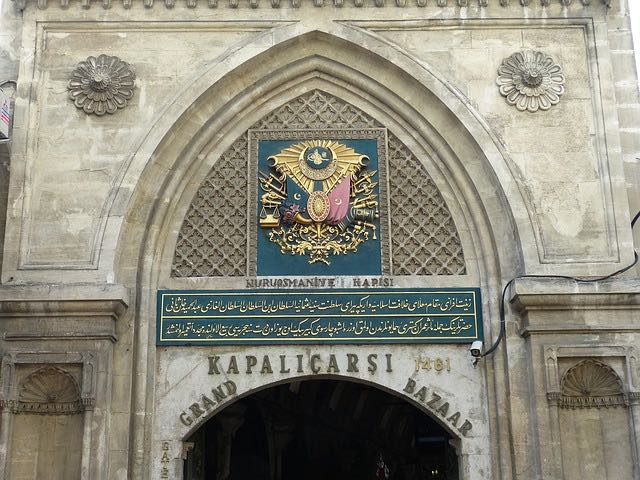 Many of us from Western countries are not that familiar with bargaining, but for Turkish people, haggling is a way of life and a way of socializing. Look around the market to see how much other vendors are selling the same item for so you can get an idea of the fair price. Practice your poker face beforehand, otherwise, the vendor will read right through you. Don’t show them how much you really want that item or they may keep the price up. Decide on the price you’re willing to pay and respectfully negotiate it with the vendor. Once you get the hang of things, you’ll be bargaining like a local in no time.

3. Take a Boat or Ferry Ride on the Bosphorus Strait

One of the best ways to see Istanbul is by taking one of a dozen ferries that crisscross the Bosphorus. The strait became popular among Ottoman Sultans in the early 1800s, when they began building their houses along the waterfront. Today, the coast is dotted with stunning neoclassical-baroque palaces. Other iconic things you’ll see on your tour include the Maiden’s Tower – a medieval Byzantine small tower shrouded in legends, and the three cross-continental bridges of the city, called the 15 July Martyrs Bridge, the Fatih Sultan Mehmet Bridge, and the Yavuz Sultan Selim Bridge.

Many times when I travel, I tend to shy away from some of the more touristy things. However, I have to say that taking the ferry ride on the Bosphorus Strait was surprisingly enjoyable. The views were fantastic all around, and it’s crazy to think that you are crossing continents. Plus, it was a pretty nice way to spend part of the day – out of the hustle and bustle and just relaxing and enjoying the views.

While this may not be your thing, many visitors to Turkey are interested in sampling some local “shisha” or tobacco through the classic hookah, which has been around since the 16th century. Most Turkish tobacco is mild, not strong, and aromatic. It is a highly aromatic variety of tobacco that is sun-cured.

Tobacco was introduced to the Ottoman Turks by the Spanish, who have developed their own method of growing and using the plant. Due to the climate, soil, cultivation, and treatment methods, Turkish tobacco plants typically have a larger number of leaves than other varieties, but the leaves are smaller in size.

5. Relax in a Turkish Bath or at the Thermal Hot Pools at Pamukkale

When you travel to Turkey, one of the top things you can do here is visit a Turkish bath. The Turkish bath is one of the most important elements of Turkish culture. Also known as hammam, it has been a social center for hundreds of years. Every Turkish town still has at least one hammam. Look for the historic ones, which were built by the sultans to serve their imperial mosques. These baths offer a beautiful display of Ottoman architecture and are made of fine marble with rich decorations.

If you have more time to explore the country, head to Pamukkale for one of the most exciting natural attractions in Turkey. The city is renowned for its hot springs and travertines. There are 17 thermal springs with water temperatures ranging from 35 degrees Celsius (95 degrees Fahrenheit) all the way up to 100 degrees Celsius (212 degrees Fahrenheit). The climate in this region is temperate for the majority of the year, which makes Pamukkale the ideal destination even during the cooler seasons. 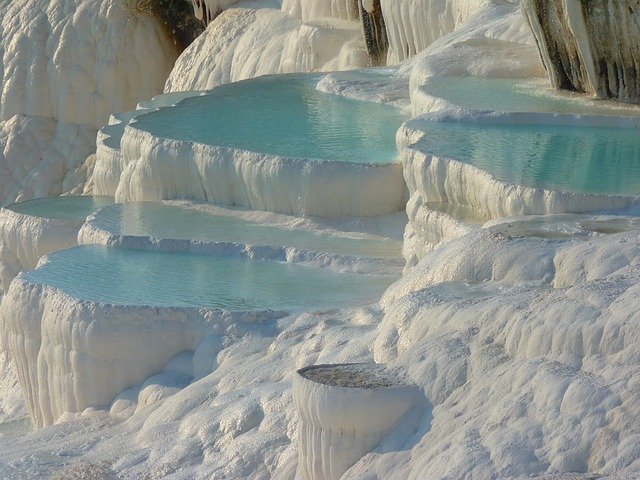 Cappadocia is the historic area of central Anatolia and what many consider to be Turkey’s most visually striking region. The moonscape scenery around the towns of Avanos, Göreme, Uçhisar, Mustafapaşa, and Ürgüp, where erosion has formed pinnacles, clefts, and caves offer some exceptional photographic opportunities.

It’s crazy to think just how far back this area goes, and what took place here over the years. Tukey witnessed some of history’s greatest moments, and remains of these events linger on to this day through the ancient sites found in all parts of the country. Many of these sites are on the UNESCO World Cultural Heritage List.

One of these must-see cities is Troy, Çanakkale’s world-famous ancient city mentioned in Homer’s Iliad and the Odyssey. In Izmir, you can visit the remains of Ephesus, an ancient Greek city built in the 10th century BC. Other important archeological sites include Stratonikeia, Knidos, Uzuncaburç, and Pergamon, among others.

8. Take a Cruise Up the Mediterranean Coast

Board a ship and cruise the Mediterranean waters that surround the islands and shores of the incredible Turkish coast. Many of Turkey’s key attractions are on or near the coast, so a cruise is one of the most practical and picturesque ways to see the country. There are plenty of activities you can do both onboard and onshore. Take a plunge in the sea for a good swim or go on excursions where you can visit ancient cities and other historical places. You can do a bit of kayaking or if you prefer, just lounging on the boat admiring the rugged scenery and bright turquoise waters! 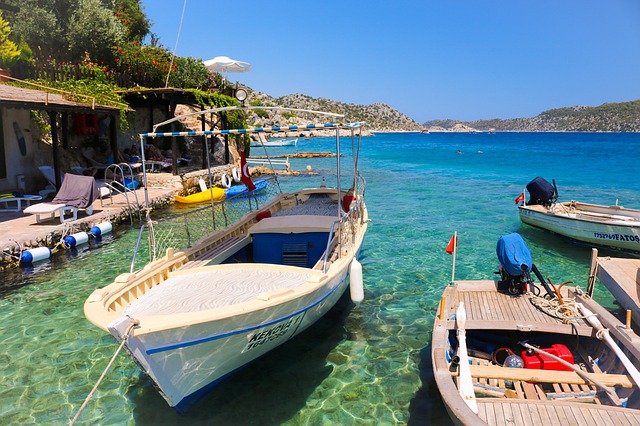 9. Party the Night Away in Bodrum

Bodrum is one of the most beautiful tourist resorts on the Turkish coast. The city is known for its high society and active nightlife and is considered the capital of the summer nightlife in Turkey. It is among the most popular travel destinations in Turkey for young people seeking sun, sea, and entertainment for their vacation. Bodrum never sleeps during the summer season. If that sounds great to you, head on over to the Aegean coast for cool parties and events.

10. Visit Antalya and Nearby Çıralı

Speaking of cool coastal towns, don’t miss the opportunity to visit Antalya, the pearl city of the Mediterranean Sea. The Antalya Region is now called the “Turkish Riviera” due to its archaeological and natural wonders. It is a place where the sea, sun, nature, and history constitute a perfect harmony. Swimmers will find here some of the clearest waters along the Turkish Mediterranean coast. Sunshine is guaranteed from April through October and winters are mild, which makes Antalya a wonderful year-round destination. 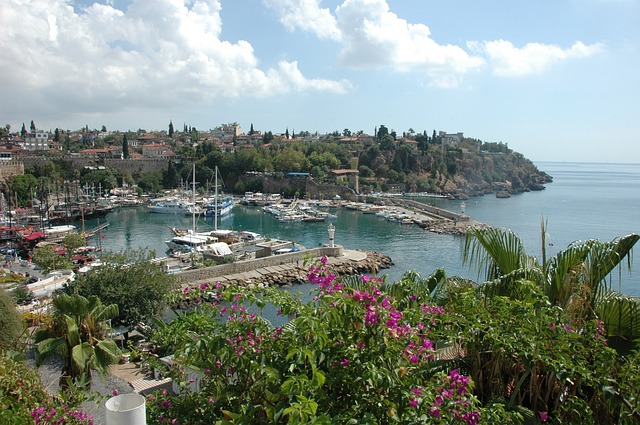 South of Antalya you can visit Çıralı, more peaceful and less crowded than Antayla, it’s also known for being a hatching ground for endangered Loggerhead sea turtles. This is a relaxed, family-friendly holiday destination that has remained largely unspoiled. In the north of the village, you can see an interesting phenomenon: the eternal “burning stone” on Mount Chimaera slopes, which are produced by natural gas.

11. Hike up to Mount Nemrut

Mount Nemrut is a mysterious mountaintop mausoleum in southeastern Turkey. It’s one of Turkey’s most breathtaking ancient sites and was made a World Heritage Site by UNESCO in 1987. Due to its remote location, deep in the Central Anatolia region, Mount Nemrut is not the easiest site to get to, but it will reward those willing to make the long journey to see it. You might not have heard of it, but you might recognize the stone statues erected on its summit, which are regularly plastered over Nat Geo covers, posters, flyers, and brochures. For safety reasons, it would be best to get in touch with a local guide who knows the hiking paths very well.

Turkey Has So Much to Offer Travelers

During my first visit to Turkey, I was a bit rushed and didn’t get much time to get out and explore. Now that I’m visiting a second time for a longer period of time, I am realizing just how many cool things there are to do across the country. If you have the time, definitely get outside of Istanbul and take your time to enjoy some of these other areas of the country.